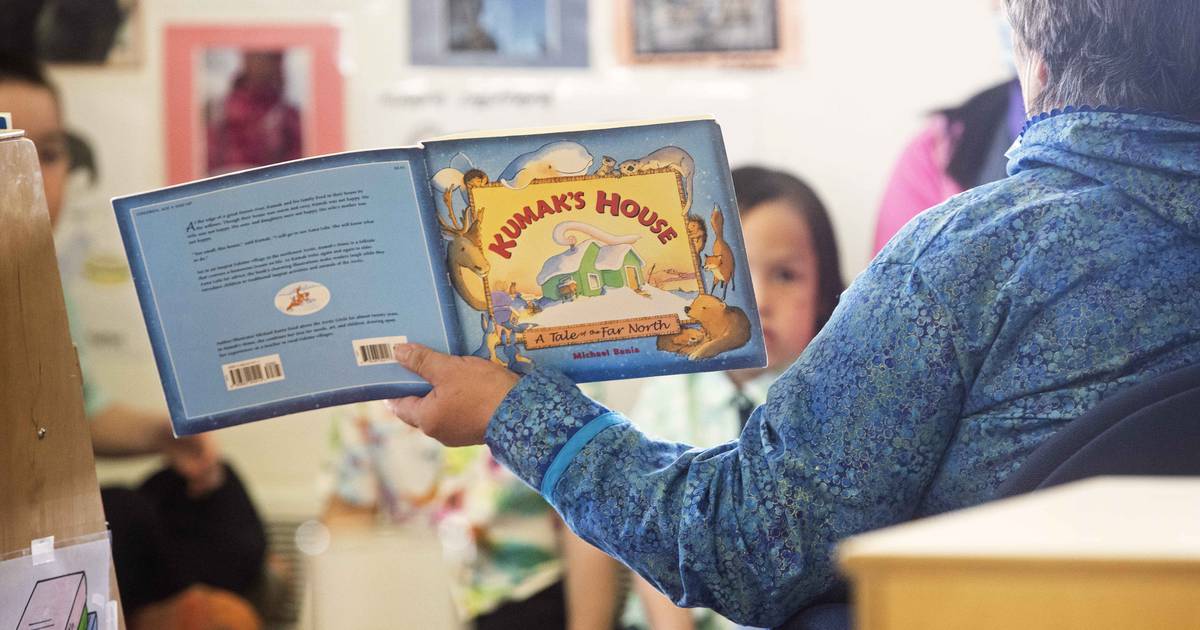 KOTZEBUE — Qutan Lambert loved coming to the Nikaitchuat Iḷisaġviat tribal school as a child, especially when it was circle time.

“My earliest memories were made here,” Lambert said. “We have to do so many things culturally. … We always had elders coming to show and tell and tell stories.

This is part of what all Nikaitchuat students do every day: the school offers language lessons and traditional activities, taught in accordance with the cycles of sustenance of the local Iñupiaq culture.

“The immersion school is the only one in the NANA region right now,” school principal Candice Suksran Baldwin said, referring to northwest Alaska. “It’s quite impressive to see the children arrive without knowing any Inupiaq…and within the first two months they begin to understand and speak it. Because children are like a sponge and they adapt very quickly to the language.

Learning the Iñupiaq language in Nikaitchuat involves more than learning new words, grammatical structures, and pronunciation. It also means preserving or revitalizing cultural identity — the relationship the Iñupiat have with the land, the community and the past, said one of the school’s founders, Pete Schaeffer.

“We realized that we had to do something to try to preserve our way of life, and the language was one of the first places to start,” he said of the decision to start the school. ‘language immersion.

In addition to keeping the language alive, Schaeffer said, the school strives to create a learning atmosphere that will embrace Indigenous culture and nurture “a strong sense of identity” in children, helping them “to be proud.” of who they are”.

Open for nearly 25 years, Nikaitchuat teaches about 20 students from preschool through fifth grade, Baldwin said. Part of the Kotzebue Tribal Government, the school operates separately from the Northwest Arctic Borough School District, but Nikaitchuat graduate students may be admitted to district schools.

When children come to Nikaitchuat, they leave English at the door and immerse themselves in the sounds and rhythms of the Iñupiaq language. Each week, students learn new vocabulary – starting with nouns and progressing to expressions, sentences and grammatical structures – linked to a thematic unit related to natural events and the seasonal cycle.

“We teach little children about everyday life in a month,” said head teacher Nina Piñagin Nanouk. “What animals come? What birds come? What are the animals used for? What is the fish for? How do we get the fish? What tools do we use?

By the end of the program, the children become fluent in Iñupiaq, Baldwin said, and become proficient in their cultural pursuits.

Each language lesson theme is accompanied by hands-on curricular projects, such as traditional animal slaughter, fishing, trapping, or learning to mushing dogs to meet sled dogs.

“Last week we were out fishing, so we brought in a fish and cut it up, then pickled the eggs,” Baldwin said. “They can go right in there and help cut it out, that’s the only way they’ll learn.”

Activities are always age-appropriate, said fellow founder Polly Agniq Schaeffer, so getting involved in ice fishing can mean helping to punch holes in the ice or creating traditional fishing tools from paper.

Like any other language, Iñupiaq is alive and evolving. When describing an object or concept that doesn’t have a direct Iñupiaq translation, teachers invite an elder to consult on word choice, Nanouk said.

The curriculum is also constantly evolving.

“We’re coming into May, and it’s super big; it’s when the water flows out,” Nanouk said. “We have all the subjects in there, based on what we see now and when the program was created. Looks like it’s changed a bit: either we freeze later, (or) we melt earlier.

Teachers adjust the lesson plan based on when the water freezes or the ice breaks.

“We feed off the land, we live off the land,” Nanouk said. “So we have to see what the weather will be like each day.”

“It kind of relaxes your tongue for the tongue,” Baldwin said.

Before the pandemic, students shared their songs with seniors, and “the seniors, they really liked it,” Baldwin said. “Some of them would look forward to it and be like, ‘Where are the kids today?'”

While visits to elders are still on hiatus due to the pandemic, 12 Nikaitchuat students recently recorded their song for broadcast on KOTZ radio station.

“There were so many songs,” Baldwin said. “They didn’t want to stop.”

The school also teaches children about Iñupiaq culture by practicing selfless leadership. In one of the recent classes, a student named Nuyaagiq was the facilitator for the day. So she brought yogurts and snacks to share with the class.

“A leader should show others how good he is by not keeping things to himself but sharing with others,” Nanouk said. “Just like on a prize catch of, say, a beluga whale – of course (the chef) can keep some parts, but the rest he has to share. And that’s how we were taught, that’s how we live — by sharing.

To create the school’s learning plan, the founders collaborated with the Iñupiaq Language Council, the Language Commission, and the Council of Elders.

“There were so many elders from all over the region who participated,” said another founder and former Nikaitchuat teacher, Nauyaq Wanda Baltazar. “There were gatherings of men where several men would gather to talk about tools, hunting, trapping, sled building, Eskimo games, celebrations and weather.”

Baltazar said that since the local people of the region have contributed so much to the development of the program, it now belongs to future generations.

“As stated in our values, the Iñupiat Iḷitusiat, ‘Each Iñupiaq is responsible to all other Iñupiaq for the survival of our cultural spirit and the values ​​and traditions through which it survives,'” she said. . “‘Through our extended family, we preserve, teach and live our Iñupiaq way.'”

European cities begin to recognize English as an official language