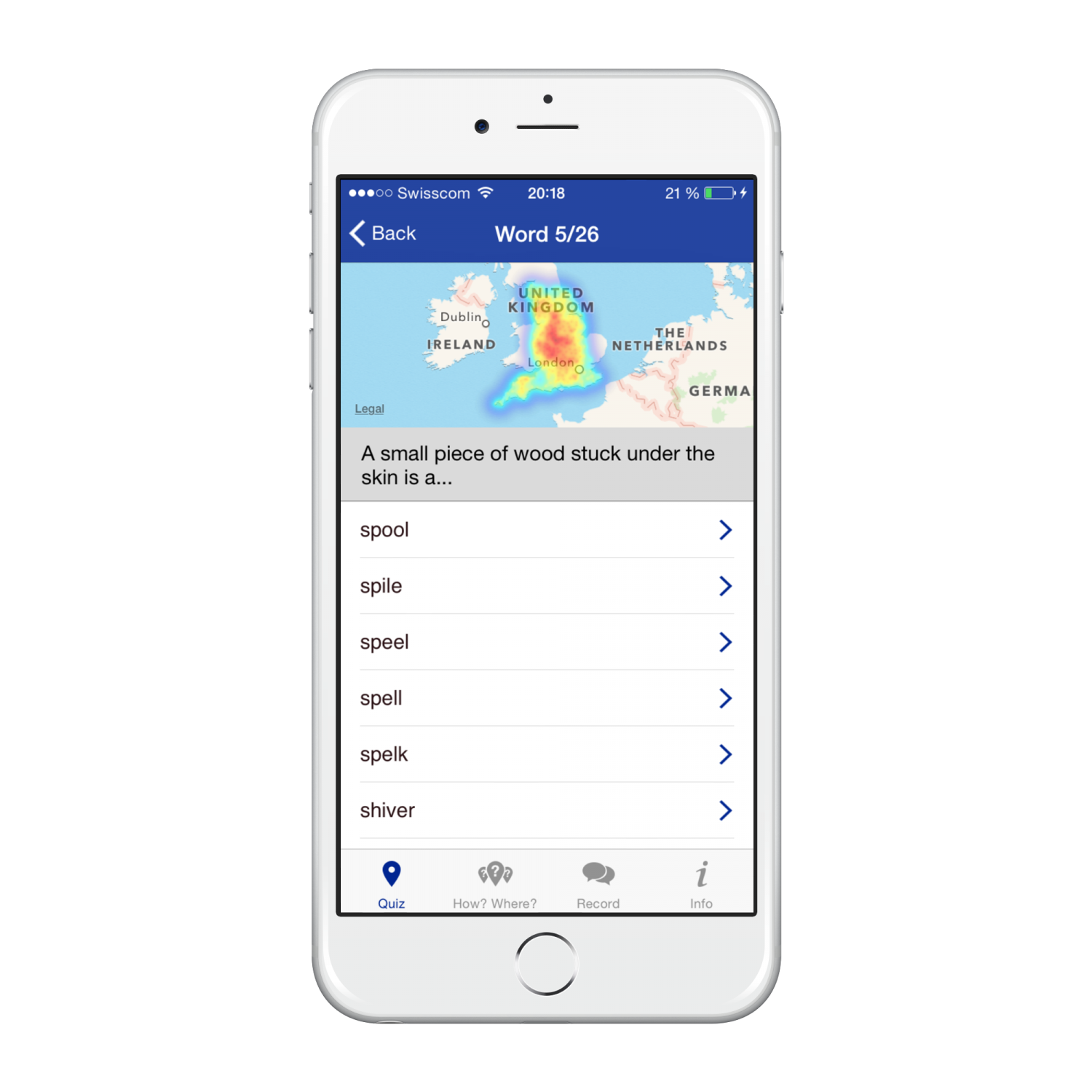 Do you say splinter, spool, spile or sort? The English Dialects app tries to guess your regional accent

A new app that tries to guess your regional accent based on your pronunciation of 26 familiar words and phrases will help Cambridge academics keep up with the movement and changes to English dialects in the modern age.

Along with colleagues from the Universities of Zurich and Bern, Cambridge’s Adrian Leemann developed the free English Dialects app (available on iOS and Android) which asks you to choose your pronunciation of 26 different words before guessing where you’re coming from. England.

The application, officially launched today on the App Store and google play, also encourages you to make your own recordings to help researchers determine how dialects have changed over the past 60 years. The English-language app follows the team’s hugely successful apps for German-speaking Europe, which racked up over one million visits in four days to the German Der Spiegel website and over 80,000 downloads from the application by German speakers in Switzerland.

“We want to document how English dialects have changed, spread or stabilized,” said Dr Leemann, a researcher at Cambridge’s Department of Theoretical and Applied Linguistics. â€œThe first large-scale documentation of English dialects dates back 60-70 years, when researchers were sent into the field – sometimes literally – to register the public. It was called the â€œSurvey of English Dialectsâ€. In 313 localities across England, they have documented accents and dialects over a decade, mostly from farm laborers. “

The researchers used this historical material for the dialect riddle app, which allows them to follow the evolution of dialects in the 21st century.

“We hope that tens of thousands of people will download the app and share their results with us, which means that our future attempts at mapping dialect and language change should be much more precise,” Leemann added. “Users can also interact with us by recording their own dialect terms and this will allow us to see how the English language evolves and moves from place to place.”

The app asks users how they pronounce certain words or which dialect term they most associate with commonly used expressions; then produces a heat map for the likely location of your dialect based on your answers.

For example, the app asks you how to pronounce the word “last” or “shelf,” giving you different pronunciations to listen to before choosing the one that best matches yours. Likewise, he asks questions such as: “A small piece of wood stuck under the skin is a …” then gives answers such as: spool, spile, speel, spell, spelk, shiver, overturn, sliver, splinter or splint . The app then lets you see which regions of the country are using which variations at the end of the quiz.

He also asks the endlessly controversial English question of whether “scone” rhymes with “gone” or “cone”.

“Everyone has strong opinions on the pronunciation of this word, but, surprisingly perhaps, we know relatively little about who uses which pronunciation and where,” said Professor David Britain, dialectologist and member of the application team based at the University of Bern in Switzerland.

â€œMuch of our understanding of the regional distribution of different accent and dialect characteristics is still based on the wonderful but now obsolete Survey of English Dialects – we haven’t had a real nationwide survey since. . We hope the app harnesses people’s fascination with the dialect to allow us to paint a more up-to-date picture of how the characteristics of the dialect are distributed across the country. “

At the end of the 26 questions, the app gives its three best guesses as to the geography of your accent based on your dialect choices. However, while the Swiss version of the app proved to be very accurate, Leemann and his colleagues issued a more cautious note on the accuracy of the app in English dialect.

Dr Leemann said: “English accents and dialects have probably changed over the past few decades. This may be due to geographic and social mobility, the spread of mass media and other factors. app guesses correctly where you are from, so your local accent or dialect hasn’t changed much over the last century. If the app doesn’t guess correctly, it’s probably because the dialect spoken in your region has changed a lot over time.

At the end of the quiz, users are asked to share with researchers their location, age, gender, education, ethnicity, and the number of times they have moved in the past decade. This anonymous data will help academics understand the spread, evolution or decline of certain dialects and dialect terms, and will provide answers about how the language changes over time.

“The more people participate and share this information with us, the more accurately we can follow the evolution of English dialects over the past 60 years,” added Dr Leemann.

After taking the quiz, users can also listen to historical and contemporary pronunciations, taking the audience on an auditory journey through England and allowing them to hear how dialects have changed in the 21st century. The old recordings are now held by the British Library and have been made available for use in the app. One of those recordings features a speaker from Devon who discusses haymaking and reflects on working conditions in his youth.

Dr Leemann added: â€œOur research on dialect data collected through smartphone apps has opened up a new paradigm for language change analyzes. For the Swiss version, nearly 80,000 speakers participated. The results revealed that phonetic variables (for example, if you say “sheuf” or “shelf”) tended to remain relatively stable over time, while lexical variables (for example, if you say “splinter”, ” spelk “,” spill “, etc.) changed more over time. Swiss user recordings also showed clear geographic patterns – for example, people always spoke faster in some areas than in others. We hope do such more in-depth analyzes with UK data in the near future. â€

The results of the German-speaking experiments were published last week in PLOS ONE.,

Provided by the University of Cambridge

This document is subject to copyright. Other than fair use for private study or research purposes, no part may be reproduced without written permission. The content is provided for information only.

How English Became English – Not Latin