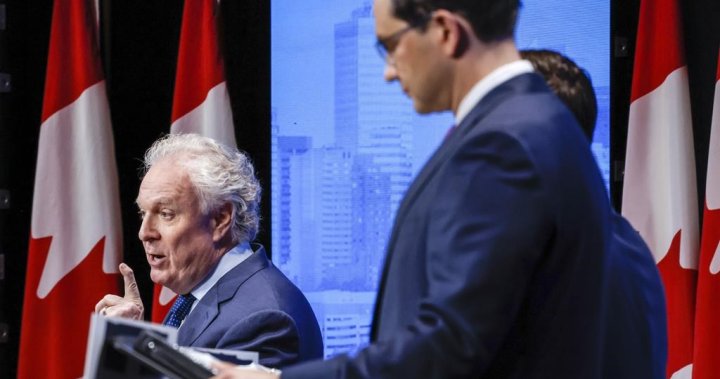 The six Conservative leadership candidates squared off in Edmonton on Wednesday night in a debate that featured their differing visions for the party’s future, as well as what they’re currently watching on Netflix.

After a heated informal debate in Ottawa last week, the Conservative Party used the unique English-language leadership debate to try to highlight the lighter side of the candidates, including questions about the music they are listening to, what they are currently reading, and the last thing they “binge-watched”.

If a candidate made a reference to a rival during the early rounds of the debate, the party would play a “sad trombone” sound effect around the room and move on.

But despite the gimmicks and a series of unconventional questions, the candidates – who aspire to lead a G7 nation – have also found time to highlight their differing views on what the Tories need to do to regain power after three consecutive defeats in the general elections.

“That’s the key question,” said Jean Charest, the former premier of Quebec who once led the federal Progressive Conservative Party.

“Everyone knows the Trudeau government needs to step down and they are looking to the Conservative Party of Canada as a national alternative. And the question they ask themselves is this: are you up to it?

1:35
Conservative leadership debate: 5 out of 6 MPs say they are pro-choice

Conservative leadership debate: 5 out of 6 MPs say they are pro-choice

“We need to unite the party around freedom,” said Pierre Poilievre, MP for Carleton and a suspected campaign frontrunner.

“When we unite the party around this cohesive principle of freedom, we bring together all the different parts of our party and we electrify and excite a new generation of young people whom I have brought into the coalition so that we can form the next government and beat Justin Trudeau.

Although Poilievre used “freedom” as his catch-all rallying cry, he made it clear that he did not believe the Bank of Canada should be free to set monetary policy without government interference.

Tories could hit 500,000 members as leadership campaigns jostle for supporters

Poilievre, who has pushed cryptocurrency and blamed the independent Bank of Canada for driving up inflation, said he would fire the bank’s governor if elected prime minister. The bank governor usually serves a seven-year term.

“If you’re an investor thinking of coming to Canada and you hear that kind of statement coming from a member of the House of Commons, you’d think you’re in a third world country,” Charest charged.

“We cannot afford to have a leader who goes there and deliberately undermines trust in institutions. Conservatives don’t do that.

The Edmonton debate was the first and only time all six endorsed leadership candidates will appear on the same stage for a debate in English.

Last week, Patrick Brown skipped an unofficial debate in front of Conservative movement faithful at the Canada Strong and Free networking conference in Ottawa. The event, formerly known as the Manning Center Conference, attracted young grassroots curators from across the country.

Some jokers suggested that Brown won the heated debate by not showing up. The debate – which featured Poilievre accusing Charest of being a covert liberal, which amounts to an insult in conservative circles – highlighted the fractures within the party and the stakes in this leadership race.

Brown’s attendance on Wednesday didn’t significantly change the dynamic, with Poilievre and Charest trying to tear each other apart, Leslyn Lewis and Roman Baber battling the anti-lockdown crowd, and Scott Aitchison calling for moderation and unity.

Do conservatives want to be in politics or government? Party stalwarts talk leadership

Poilievre is widely seen as the frontrunner in the Conservative leadership race. But of the three previous leadership races the modern iteration of the party has staged, only one – the 2004 leadership that chose Stephen Harper to lead the party – saw the early front-runner take the top job.

The MP for Carleton and former cabinet minister is expected to spend the rest of the race with a target painted on his back – with Charest and Brown saying he is not acceptable to the wider Canadian electorate and Lewis suggesting he is not sufficiently committed to the conservative base.

Aitchison positioned himself as the voice of moderation in the contest. On Wednesday night, as with last week’s debate, it was difficult for him to get a word out on the edge.

The Conservative leadership candidates are due to meet in Laval, Que., for a French-language debate on May 25. They have until June 3 to register new members to support their candidacy, before taking part in the summer barbecue circuit before September 10. vote.